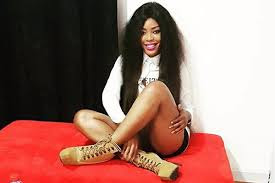 Ghanaian actress, Baby Blanche has disclosed the fact that she does not wear panties. She made this revelation in an interview with Andrew Tandoh Adote on the TONIGHT show. The lady who is the brain behind the ‘operation remove your dross now’ campaign attested to the fact that her campaign is an actual reflection of what she does. “I practice what I preach. Fact that you practice it does not mean you should go about telling everybody about it”, she said. Blanche said the initiative is being taken out of context. She explained that the campaign arose from a need she saw to enlighten ladies on the fact that wearing panties and other underwear under the ‘harsh’ weather conditions in the country increases their chances of getting candidiasis infections. The campaign is to help ‘some sisters’ out there, she explained. Quizzed on how she felt about Akuma Mama Zimbi’s critique of the movement, she said ‘She’s someone I admire. I felt she didn’t listen to the details of my campaign. The theme alone made her come out.”
She added that if Akuma had paid more attention to the movement, she would not have made some of those comment. “I feel if she had listened more to what I was trying to say and weighed her options, she would have agreed with me to a certain extent.” Baby Blanche explained that she accepts the fact that not everyone will agree with her adding that she sees Akumaa a mother figure and so is not much bothered about her comments. She remarked that in addition to donating some stuff to people all the time, she could go about creating awareness of this nature in order to “help some sisters.”