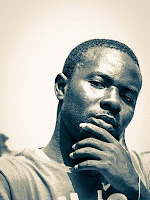 After making air play on his hit song tittled “BORKORBOKOR”, the artist who is in the person of Otaado AB and signed to the twin team B1entertainment/Rolup Records is set to release his new song titled “MI SUMO BO” which features Mustipy.
Mi Sumo Bo is a GA dialect which means I LOVE YOU is produced by CJ and mixed by CAPITAL AB is set to be released on 28th October, 2017. The team believes all listeners will enjoy this song so they should watch out as they work on the song to be released.
Please follow and like us: