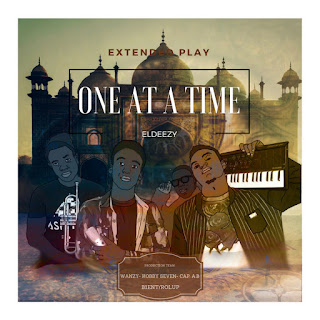 After the emotional tune “Eyaa Kai” and three months of quietness in the entertainment world, the B1 Entertainment and Rolup Records’ recording artist “Eldeezy”, is set to release his first ever Extended Play[E.P] christened ‘One At a Time’. Eldeezy goes on to explain that he gave this title because; for his few years of hustle, he has realized there is no way one can skip a step in life. He said ” life is a step-wise affair, you might have ‘1’ already, so you must cross 2,3,4 and 4,5,6 before you get to the perfect number 7″. He confirmed he has a song on the E.P. titled “one at a time”, on which he featured the newly signed Rolup Records’ recording artist and Sound Engineer ” Kobby Seven” [produced by Wanzy and mixed by Capital A.B]. Eldeezy portrays genre versatility on this, from source, the release format is going to be one every two weeks. All fans are urged to be alert for the first release which is also Eldeezy’s first ever banger tune. titled “Endorse am”, dropping on the 23rd of June, 2017. He finally gives credit to the team behind this massive production [ Wanzy, Capital A.B. and Kobby Seven].